3 Stocks that were Made for Sheltering in Place 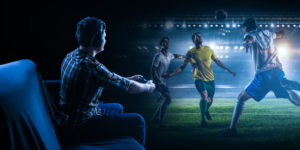 The market is filled with companies that have struggled in terms of earnings and performance through the COVID-19 closure of our economy. With shelter-in-place orders in place throughout the country and continued fear of leaving the house, it makes a lot of business models not work. However, the idea that it’s affecting every business the same wouldn’t be accurate. There are a number of companies that have been thriving in the current environment.

As you try to identify companies that might be doing well, it doesn’t hurt to start with what has been performing well and work backwards. For example, which companies are higher year-to-date? From there you can see if there are any themes present with any of them. For example, maybe there are a number of ecommerce companies.

Sometimes you have an idea and you search for companies that fit the narrative. In this post, the focus is more on companies that you might use frequently in normal circumstances but may use even more often in “the new normal.” Companies like social media, education and gaming. Once you’ve found your companies, then you move forward with earnings and price performance.

The following three companies have some degree of fundamental improvement during the first quarter and are higher year-to-date.

As you may have guessed, staying at home generally leads to more video gaming. In the company’s recent earnings announcement, they reported that Digital net bookings for the current fiscal year were up 9% year-over-year (yoy) and represents 78% of the total through three quarters. Two of their biggest gaming properties have been taking off as well. FIFA 20 now have more than 25 million unique players and Madden NFL 20 reached its highest engagement in history.

So far, year-to-date the company is up nearly 10%.

SnapChat has seen substantial growth in a lot of different areas of their business. For social media companies, active daily users are a huge metric since these companies generate most of their revenue through ads. Their daily active users (DAU) increased 20% yoy in Q1 2020 to 229 million. They saw 75% of their users engage with their camera and augmented reality platform every day. Revenue growth was 44% yoy, with their highest revenue growth occurring in Europe at 61%. The rest of the world saw growth of over 40%, including North America.

So far, year-to-date the company is up over 8%.

Chegg is a student-first connected learning platform. The Company helps students study for college admission exams, find the colleges, get grades and test scores while in school, and find internships that allow them to gain skills to help them enter the workforce after college. The company has 3.9 million subscribers and saw its services subscribers grow 29% yoy. That growth led revenues to increase 31% yoy. The company sees the market opportunity at 54 million, which means there is substantial opportunity to expand its subscriber base.

So far, year-to-date the company is up nearly 65%.