It was a story buried in the hard copy of The New York Times, on page B6 with the headline “Bank Agrees to Settle Mortgage Crisis Claims.” It could have been written in 2009, or 2010. But it is more recent than that, appearing just last week:

“More than a decade after the mortgage crisis blew a hole in the United States economy, banks and prosecutors are still sorting out the tab for the damage.

The latest reckoning came on Thursday, when Morgan Stanley agreed to pay $150 million to settle claims by the State of California that it misled investors about the risks of mortgage-backed securities sold to two state pension funds for teachers and public employees.

The case was the last remaining government lawsuit against the bank over issues related to the financial crisis, according to Mark Lake, a spokesman for Morgan Stanley. In the agreement, which included no admission of wrongdoing, Morgan Stanley denied the state’s accusations.

Banks have paid more than $240 billion in fines and penalties for their actions during the crisis, according to a tally kept by the investment bank Keefe, Bruyette & Woods.

In 2016, Morgan Stanley paid $3.2 billion to settle state and federal claims that it had misled investors about the quality of the loans underlying its mortgage-backed securities.

Later that year, California sued the bank over the losses its pension funds had incurred in connection with those investments. Last year, a state judge in the San Francisco Superior Court rejected the bank’s motion to have the case dismissed.

Traders took the news in stride and the stock shrugged off the news.

Are Tech Stocks the Next Great Fine Payers?

Also last week, The New York Times carried a number of other stories about large fines, this time associated with Facebook (Nasdaq: FB).

In one article, the paper noted that “the social network was in negotiations with the Federal Trade Commission over fines relating to the company’s misuse of user data in the Cambridge Analytica scandal.

Around the same time, Facebook made it public that it was setting aside between $3 billion and $5 billion for the fine.

In Silicon Valley and Washington circles, the news kicked off an informal parlor game of “Guess That Fine,” with some speculating that even the high end of Facebook’s public estimate would be little more than a slap on the wrist.”

The article noted the problem with understanding exactly how Facebook should be punished,

“We don’t have a good regulatory framework [for Facebook] because this kind of scale and impact is unprecedented. And our ideas for remedies, things like fines, are based on an outdated view of how markets work,” the Glitch C.E.O. and longtime developer, Anil Dash, told me.

“The F.T.C. is based on the premise of markets where consumers have choice,” Mr. Dash continued. “As long as their remedies are conceived of within that outdated framework, it will remain structurally impossible for them to hold any major platform accountable in any meaningful way.”

Once again, traders shrugged off the news,

“Don’t believe the critics? Then just ask the market. As BuzzFeed News pointed out on Wednesday, in just one hour of after-hours trading after signaling its impending $3 billion to $5 billion fine, Facebook’s market capitalization increased by $40 billion.”

BuzzFeed concluded the market reaction was “signaling that investors consider the estimated fine to be a slap on the wrist that could’ve been far worse.

“A fine in the low billions of dollars wouldn’t hold Facebook into account,” Rep. David Cicilline, chair of the Subcommittee on Antitrust, Commercial and Administrative Law, told BuzzFeed News earlier this year. “Fines have to be so high that they change the behavior of the company and it’s no longer just the cost of doing business.”

In its earnings statement, Facebook said it had set $3 billion aside in anticipation of the settlement. And while that hurt its net profits, the company’s revenue in the first three months of 2019 still grew by 26% over last year to $15 billion, and its massive global user base remains engaged. 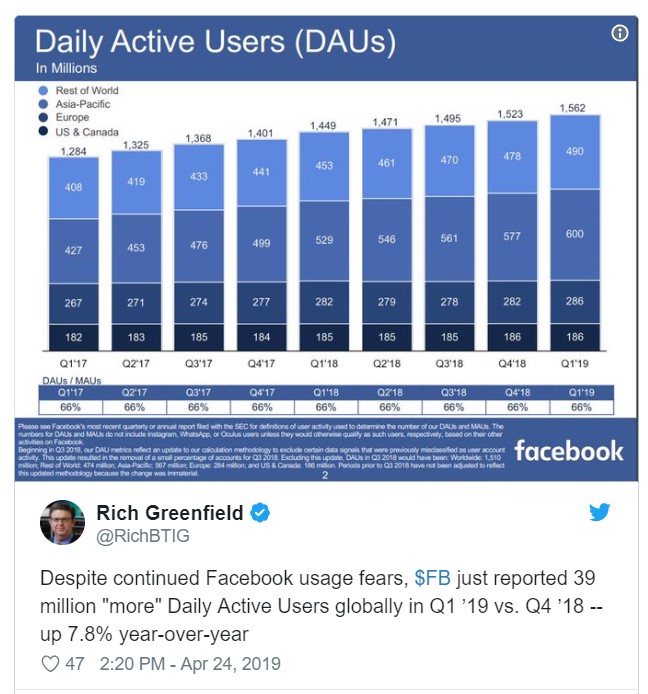 In the end, the fine seems to be a secondary consideration as long as the business is doing well from an operational perspective.

This could leave traders wondering whether the stock is a buy or a sell. The chart is bullish.

FB sold off when the news first broke last year and one reason for the decline in price was the fact that traders did not know what happen. There was a great deal of uncertainty and many traders in the market tend to sell when uncertainty exists.

The fines, large as they may seem, relieve uncertainty and that creates a potential for the stock price to rally more. It is also important to remember the financials have paid an estimated $240 billion in fines over the past decade and the sector continues to prosper.

At a certain point, when a company pushes into new markets, the cost of fines from regulators almost becomes an operating cost or a cost of doing business. This may not be a favorable position and will give rise to critics.

But the financial crisis could be a precedent. Companies that push the envelope into new markets will make mistakes and regulators will address the mistakes after the fact in the only way they can, with significant fines that penalize the specific acts.

This is a controversial business model and the banking sector has attracted a number of critics, including a number of political leaders.

Tech companies could face the same fate, and this might generate significant headlines but not be a reason to shun the sector. Fines that can be paid could even be bullish as they relieve uncertainty.