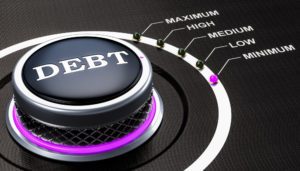 As you look at the major market indices, the movement is being dominated by a handful of stocks. You can probably reel off their names by heart because you probably use their devices, software, shopping platform or social media app. These behemoths are the market, and so when the market goes down, these stocks will likely lead it lower.

As a result, trying to look behind the scenes at companies that don’t drive the market can be significant. Since indices typically use market capitalization as a measure to weight the individual stock weight, you can use market cap to find smaller companies with less market impact. Mid cap companies are defined as having a market cap between $1 billion to $10 billion.

As you consider a company’s solvency in a crisis, corporate earnings start to take a back seat. Especially when so many companies are withdrawing earnings guidance. For example, AT&T (T) and Kimberly-Clark (KMB) announced earnings Wednesday morning and withdrew their guidance. As a result, the balance sheet becomes more preeminent. Two things stand out on a balance sheet in the current climate: cash and debt. All the companies in our list have little to no debt with the highest debt-to-equity of 0.07.

The final measure that was considered when compiling the list is valuation. Earnings-based measures like P/E are problematic if earnings are impaired and since most companies haven’t reported earnings, that valuation measure will likely increase from current levels. The price-to-book (P/B) ratio compares the price being paid per share against the book value per share. The book value of a company is derived when subtracting the assets minus the liabilities. All of these companies have a P/B value ratio of less than 2.

AGI is a Canadian gold mining company with a $2.47 billion market cap. With the Fed and other foreign central banks printing money at levels we’ve never seen, gold has been performing well. Bank of America recently raised their price target for gold to $3000.

AGI currently has no debt other than capital lease obligations with $182.8 million in cash. This gives a cash-to-debt ratio of 257. The company is trading at the best P/B of all the companies on the list at 1.04. This means the current price almost perfectly reflects the liquidation value of the company.

GDOT is a financial technology and bank holding company with a $1.44 billion market cap. The company got a boost in price in late March as analysts upgraded GDOT when they changed the CEO of the company.

GDOT currently has $35 million in short-term debt and no long-term debt other than capital leases. They maintain $1.063 billion in cash, which gives a cash-to-debt ratio of 15.65. The P/B ratio is 1.48, which is near the lowest level in the past 10 years.

The target for GDOT is the February high near $40.

NOAH is a Chinese asset management company with a market cap of $1.43 billion. Being a Chinese company, there are some risks there and the previous earnings weren’t great, but the large surge in price on high volume is an indication of the potential movement.

NOAH currently has no short-term debt and no long-term debt other than capital leases. They maintain $625.5 million in cash, which gives a cash-to-debt ratio of 13.95. The P/B ratio is 1.33, which is near the lowest level in the past 10 years.

The target for NOAH is the 161.8% projection of the March bullish move near $15.