Special: Warren Buffett Was WRONG on This One… Time for YOU to Profit!

5 Stocks to Play the Rally in the Steel Producing Industry 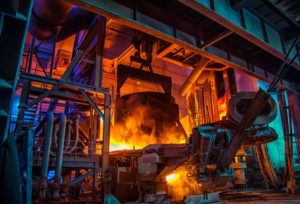 You wouldn’t normally think of investing in steel producing companies in a recession, but these are unusual times. Last week, It was steel producing companies and metallurgical coal companies that led the way in an otherwise disappointing week for the market. After the Federal Reserve failed to deliver the stimulus last Wednesday, it may be the likelihood of a stimulus bill that includes infrastructure or just expectations of a rebound in the economy. Either way, these were companies that led the way last week.

Steel is s metal that is used extensively in our everyday lives. It is completely recyclable and requires very little energy to produce. Also, due to advancements, emissions are less than half of what they were in the 1960’s.

Steel is made from iron, which is the fourth most abundant element and make sup nearly 5% of the earth’s crust. The Iron Age started around 2000 B.C. and saw the use of the metal replace bronze for tools and weapons. Blacksmiths would heat the iron and use an anvil to hammer out impurities. Cast Iron was formed using higher temperatures in the Middle Ages. It made the metal harder but more brittle.

Steel incorporates iron and carbon, forming a metal that is harder than wrought iron and not as brittle as cast iron. Steel is made using a blast furnace comprised of iron, coke and limestone. As the coke burns at the top of the furnace, the oxygen is released from the iron ore. Limestone helps eliminate impurities at the bottom of the furnace.

Coke is an essential fuel that is used as the reactant in the steelmaking process. Metallurgical coal is a grade of coal that that can be used to produce good quality coke. Thus, the demand for coal is linked to the increased production of steel.

Last week, it was the coal industry that led the market as the top-performing industry group at 22.32%. Last week’s performance is also part of a strong monthly performance of 33.45%. As metallurgical coal companies began not heat up, late last week it was the steel industry that began to form breakouts.

The following group of five stocks were strong performers last week from the coal and steel industries.

U.S. Steel produces and sells flat rolled and tubular steel products made in North America and Europe. The company’s share price finished 22.5% higher on the week and closed above its $8.20 resistance on strong volume. The rally late in the week accompanied strong bullish option activity on Thursday and Friday.

ArcelorMittal is global company and the largest steel producing company in the world with over 97 million tons produced in 2020. The company’s share price finished 9.3% higher last week and closed at a new multi-month high on Friday with substantial volume. Similar to X, the company had significant bullish option activity on Friday.

Arch Resources is a thermal and metallurgical coal producer from surface and underground mines across eight different mines in the U.S. The company’s share price finished 29.91% higher on the week, with an 8.2% move on Friday. The price completed a double bottom formation on Monday September 14 with potential to move to over $60 in the near-term.

Warrior exclusively produces metallurgical coal for the steel industry and is located in Alabama. The company’s share price finished 16.27% higher on the week and broke its $18 resistance last Monday. The breakout is an indication that the price may test its 52-week high near $24.