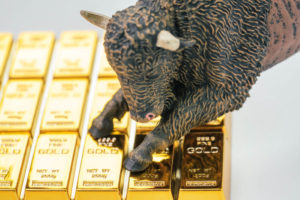 Although shares of Sibanye Stillwater (SBSW) are at a 52-week high, one trader sees shares moving even higher. The April 2021 $15 calls on the company saw a 20-fold rise in volume. Over 2,580 contracts traded hands against a prior open interest of 127.

The bet, expiring in 176 days, is that the precious metals mining company will rise another $1.50 from its current price near $13.50. The calls will move in-the-money on a further 11 percent move in shares.

The buyer of the calls paid about $1.90 on average, so shares would need to be closer to $17 for the trade to close at a profit.

Sibanye Stillwater is based in South Africa, and has mining interests there as well as in the United States and Europe. Rising metals prices and low fuel costs have led to a boom in the price of shares.

Action to take: The company has seen shares more than quadruple off their lows of the year. Nevertheless, with rising prices for metals and with revenues up 134 percent per year, the gold miner could move higher. The mining sector is relatively small, so when traders get interested, prices tend to rise quickly.

These April calls look attractive, as gold prices will likely see their next leg higher as more stimulus measure are announced. That will most likely occur in the weeks following the election.