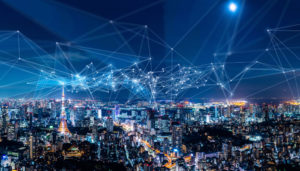 5G is here. The fifth generation of cellular network technology, it was first introduced in late 2018. Rollouts started in 2019, and now in 2020, those rollouts continue, even amidst a backdrop of economic uncertainty.

Compared to its predecessors, such as the prevailing 4G or 4G lte, the new network will have increased bandwidth and faster download speeds. This will allow for better calls… but it will also allow for better technologies in the Internet of Things (IoT) space.

As with any technological change, there will be winners and losers in the stock market.

5G is a space dominated by many big players listed on the Nasdaq, as opposed to penny stocks, pot stocks, and the like. But even these giant companies have some huge upside ahead as the 5G network rollout continues, which many Wall Street analysts have underplayed.

We see these stocks as the best 5G stocks to buy now:

Based out of the Netherlands, NXP Semiconductor (NXPI) is a massive wireless chip player likely under-the-radar for U.S. investors.

We like it for its Bluetooth-enabled chips, wi-fi enabled chips, and other communication processors. It’s a big player in the fast-growing China market, but its operations are international.

In addition to the 5G market specifically, chip and semiconductor stocks are huge potential players in other technologies as well, including cloud technologies, smarter automotive platforms, and so on. NXP is leading the way on 5G chips right now.

Shares even pay a dividend, although at about 1.5 percent, it’s not a large dividend yield. But it’s hard to find technological innovators with so many products to market that can fit in every category of tech growth expected over the next few years. NXP is one such play.

This wireless chip maker is a leader in the 5G boom. That’s because it’s the industry leader for wireless chips, and the company has a massive hoard of patents.

They earn a profit by leasing out their patents, letting someone else take on the manufacturing risks. In exchange, they get a royalty payment for every sale made.

In other words, no matter which company sells the most 5G smartphones, Qualcomm is likely to get a cut of the action. That makes it a great play in just about any market.

Because of the company’s operating model, it’s also able to pay out a generous dividend, which can pay investors to wait for the 5G network to reach its full potential. It’s harder to find a better mix of growth and income on the market in this space.

While there’s a battle going on over some of the chips and technology that goes into a 5G-enabled product like a 5G phone, consumers will want to stick with trusted names. Leading the smartphone sector is Apple (AAPL). A few models of 5G iPhones are already in production.

The iPhone goes through a new iteration every year, and compared to the products of competitors, two things always stand out.

First, the iPhone costs a lot more—which tends to mean larger profit margins for shareholders. Second, the phone provides the simplest user interface in the smartphone realm, making it a popular choice for consumers, even with the higher price point. So far, other 5G smartphones seem to lag in that space as well.

We see that trend continuing. Yes, even as shares of this company remain near all-time highs at a $1.5 trillion market cap, the stock is still a buy in today’s market. This hasn’t been seen as too much of a 5G play yet, but Apple will benefit from the 5G revolution. That’s a fact most analysts haven’t played up too much lately, and likely won’t until the company surprises with some better-than-expected earnings as a result.

Cell towers are ubiquitous these days. But they don’t just pop up as a utility, per se. Rather, there’s an entire ecosystem of finding optimal locations for cell towers, and then leasing out the space. That’s why you may see standalone towers, or smaller mini-towers attached to the side of a building. It’s all part of the complexity of 5G deployment.

One big player in this oft-overlooked space is Crown Castle International (CCI). They lease out the spaces and negotiate contracts, usually with automatic escalation clauses.

But the best thing about the company? It’s the fact that it’s structured as a real estate investment trust (REIT). Unlike a traditional stock, it has to pay out at least 90 percent of its earnings to shareholders. While that means the company pays out about a 2.8 percent yield, that yield has been growing—but not as fast as the share price!

A look at the stock chart over the past few years shows how powerful that is. The cell tower REITs have been great performers. That’s before the 5G rollout occurred. 5G towers are now under construction.

It’s a simple-to-understand business model that takes a safer approach to this fast-growing space without worrying about who has the best chips, or which smartphone company will change their suppliers. In any market, there’s a utility-like play, and Crown Castle is one of the leaders in 5G infrastructure.

It’s no surprise that the telecom stock is one of the top 5G rollouts.

We like it as a way for investors in the space to get well paid with dividend income, thanks to the company’s sizeable dividend payment as well.

New contracts and phones with 5G technologies will still need to access the network somehow, and that’s where AT&T’s telecom operations come into play.

But with the company’s recent acquisitions of DirecTV and Time Warner, they also have a robust amount of content that they can deliver over that network as well. This combination of network access and content over that network makes it an attractive play.

It’s clear the company’s acquisitions in recent years have been driven towards making a move that would allow the company to profit from the 5G rollout. Analysts haven’t been bullish on the company lately, but a low share price enables investors to lock in a dividend yield near 7 percent right now.

Is 5G Worth Investing In?

Absolutely! As with prior generations of the cellular network rollouts, there have been fortunes to make that far outperform the stock market. However, there are plenty of great, large-cap companies easily accessible and tradable on the Nasdaq to take advantage of right now. You can even trade in the space as well!

Who is Leading in 5G Technology?

The leaders depend on how you define the technology. We believe the companies listed here, which do everything from manufacture phones to provide the network to leasing the cell tower space and so on—are the best 5G stocks. This is a huge and diverse market. All these companies are leaders in their respective space, and have tended to beat the stock market in the past few years. There are plenty of other Nasdaq-listed companies that may fill a smaller niche in the space that are great investments too.

Each generation has a lot more functionality than the last. The first cellular generation could barely handle phone calls. The second added texting. The third added some streaming video capability. The fourth was an improvement. The fifth will make download speeds so much faster that more mobile devices can be interconnected than ever before by an order of magnitude. It’s no wonder these tech stocks have been so explosive.

Why is 5G the Future, and How Will it Change Things?

5G devices will allow self-driving cars to communicate with each other, sharing vast amounts of data back and forth almost in real-time. It will allow for higher-quality streaming, and provide a way for many other technologies to connect and interact for the first time.