The marijuana story is taking the world by storm.

Canada has legalized it. U.S. States are pushing for further acceptance. Polls show that Americans highly favor its legalization at 61%

Corporate America has woken up to the opportunity.

In fact, Coca-Cola may be looking to get into the pot-infused drink business. Beer companies like Constellation Brands just invested $4 billion in Canopy Growth. 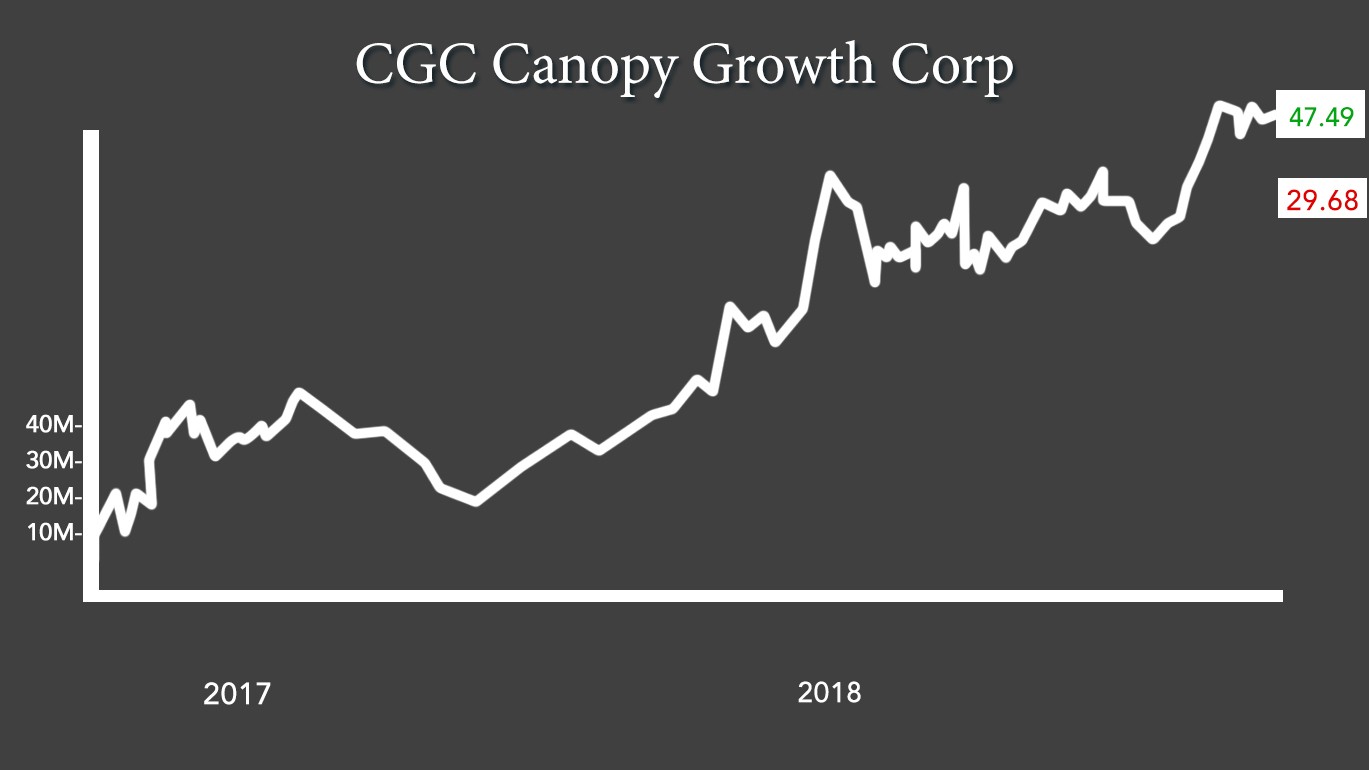 Related stocks have exploded over the last year.

All of these are still great opportunities by the way. Even TLRY, which just did this: 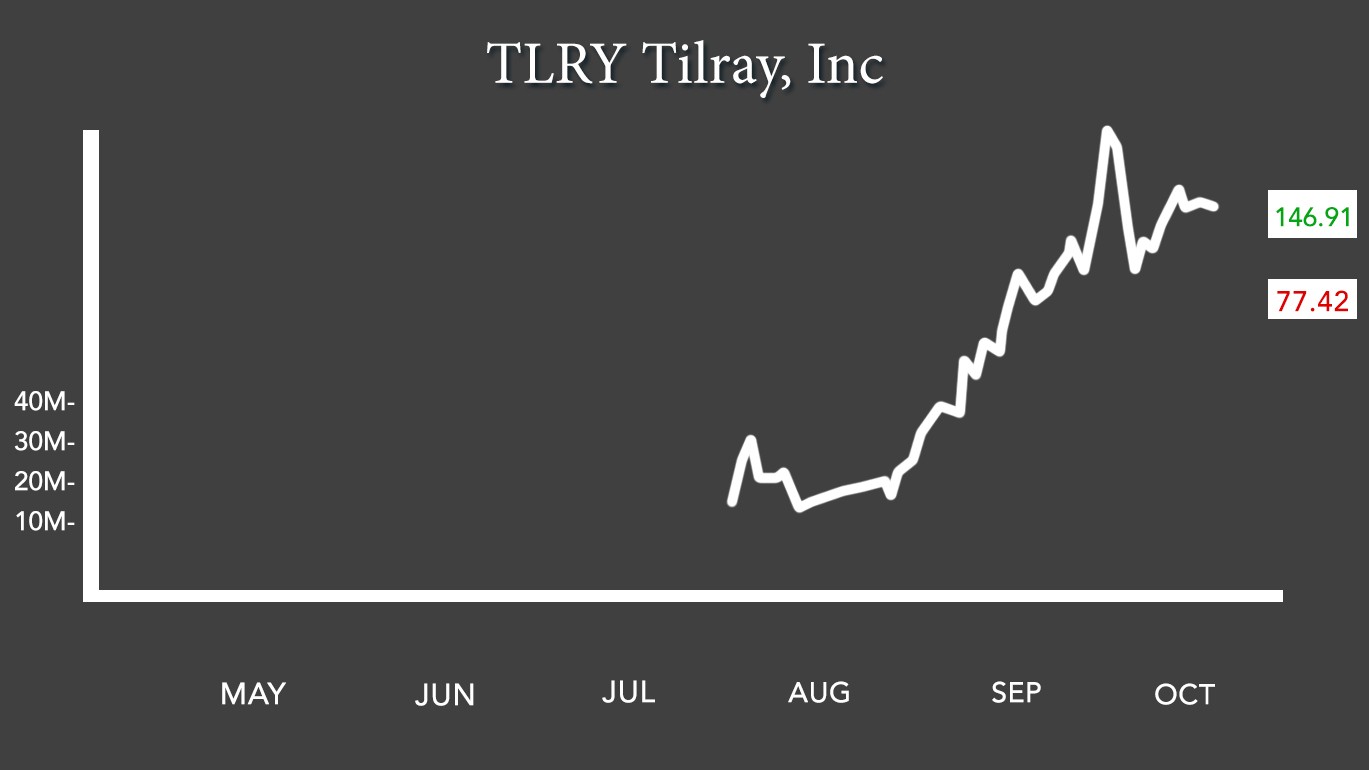 And unbelievably, there are stocks that are still dirt cheap with significant upside potential.

In fact, according to Business Insider, “Legal marijuana could soon become a bigger industry than soda, and it has already started putting pressure on alcohol sales, according to the investment bank Cowen. If marijuana is made legal nationwide in the US by 2030, the legal weed industry could generate $75 billion in sales by that year.”

State sales are just beginning to approve its use

For example, Nevada’s recreational marijuana market was exploding, as retailers sold close to $200 million of cannabis between July and December 2017. That’s significantly faster than Washington State, which sold $67 million worth, and Colorado, which sold $114 million.

California could see $5 billion in revenue from recent legalization. Recreational sales could soon double the size of the marijuana market.

On top of that, 61% of Americans now believe marijuana use should be legal.

Up to 88% of Americans favor its medicinal use, too.

Even corporate America began jumping on board.

“We believe alcohol could be under pressure for the next decade, based on our data analysis covering 80 years of alcohol and 35 years of cannabis incidence in the US,” analysts at Cowen noted, as quoted by CNBC. “Since 1980, we have seen 3 distinct substitution cycles between alcohol and cannabis; we are entering another cycle.”

According to Pot Network:

Molson Coors is chatting with pot stocks about creating cannabis-infused beers. The recreational market is anticipated to erupt in North America come October, and the beer and alcohol industry is looking to take the biggest hit. Molson Coors is not the first brewing company to take a closer look at cannabis. After their Canadian sales dropped more than 2% last year, the brewer is looking to partner with a cannabis producer.

“Along with many others in the beverage industry, we are closely watching the growth of non-psychoactive CBD as an ingredient in functional wellness beverages around the world,” Coca-Cola said, as quoted by CNBC. “No decisions have been made at this time,” adding that it would not comment on further speculation.

Even more excitement began to grow with Canada legalizing marijuana.

We couldn’t ignore the potential. And we still can’t.

The legalization of recreational marijuana just in Canada is expected to generate $5 billion in sales. The industry could balloon to $8.7 billion shortly after, as marijuana retail sales just in Canada are likely to surpass beer, wine and spirit sales combined. However, some analysts believe even those predictions are too low. In fact, according to Oracle Poll Research, Canada could see more than 11 million marijuana users by 2021 instead of 5.2 million, which could produce between $8 billion and $12 billion in annual sales.

“This is a multibillion-dollar industry going from black to white,” says Vahan Ajamian, an analyst with Beacon Securities in Toronto. “It’s like the end of alcohol prohibition in the US. It’s a once in a generation kind of investment opportunity.”

Of the many stocks that remain inexpensive with exemplary potential is MedMen.

The $4.25 stock is just beginning to build momentum and could double, if not triple with CGC and TLRY. The company operates 19 licensed facilities in California, New York and Nevada, and recently obtained a license to do business in Florida. 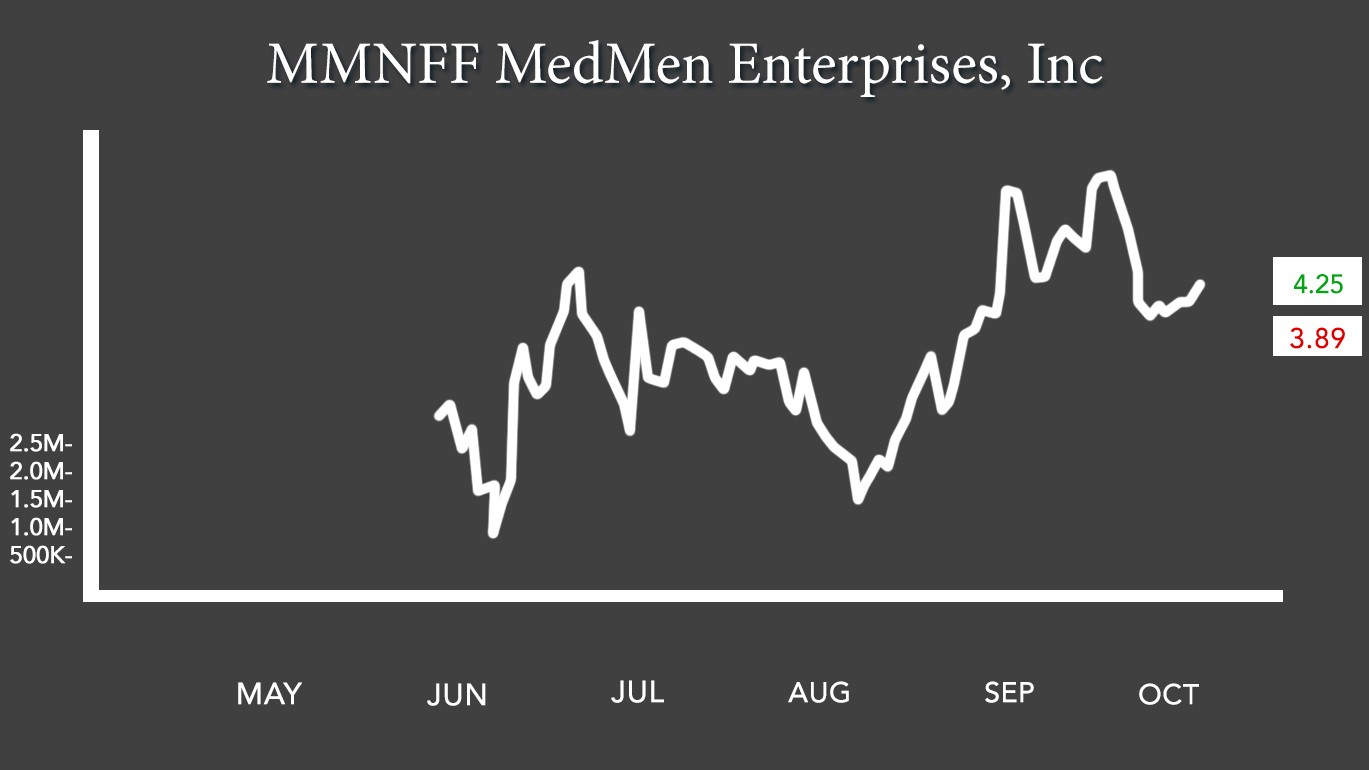 “Florida is the third most populous state in the U.S. with a rapidly growing medical cannabis market and large potential adult use market,” MedMen said in a statement. “The state has high tourist activity and is home to the largest elderly community in the nation.”

The company even just closed an acquisition of a dispensary and a cultivation license from Treadwell Nursery, a Florida company that has been approved to grow marijuana. The license will allow MedMen to open as many as 35 medical cannabis dispensaries in Florida and also grow the plant there.

Then, the company then entered the Arizona medical cannabis market with an acquisition of Monarch. By the way, Arizona is one the largest medical marijuana markets in the country with over 172,000 current patients.

It also extended its operations in Chicago. Illinois is one of the fastest growing medical marijuana markets in the U.S. In fact, since the year began, qualifying patients jumped 41%.

The best part – it’s still expanding. And its stock is still dirt cheap, but not for long.

It also has exposure to Canada.

The company teamed up with Cronos Group to form joint venture, MedMen Canada with plans to expand throughout the country.

Plenty of Growth under the Hood

Across the Company’s operations in California, Nevada and New York, systemwide retail revenue was US$19.2 million (CA$25.2 million).

That retail revenue for the quarter is primarily attributable to MedMen’s stores in Southern California’s recreational market. Excluding its Abbot Kinney store, which opened in early June 2018, the Company’s other 7 retail locations reported a combined US$17.4 million in revenue (CA$22.8 million), with an average retail markup over wholesale of 90%.

We believe this $4.25 stock could more than double to $10 in coming months.

Longer-term, we believe it could be a $20, even $30 stock as the Gold Rush gets underway.

The most exciting part – this isn’t the only opportunity we’ve found. Stay tuned for more.