The Miracle Metal Superstock: How this $7 Company Could Change the World and Your Portfolio Forever

It’s one of the oddest metals in the world.

Unlike anything most of us have ever seen before.

Not only can it melt in the palm of your hand, it can morph into other shapes on command and move on its own. In fact, if you were to break this metal into several pieces across the room, it can put itself back together in its original form.

It’s like something you’d see out of the Terminator movies, right?

Already, technology CEOs, defense contractors, and energy companies are rushing to get as much of this metal as possible. Better yet, analysts believe gallium has the power to become the tech sector’s next metal of choice aside from silicon.

“The story is an under-reported and really revolutionary development,” says defense industry analyst Loren Thompson, as quoted by Breaking Defense. “People are saying it’s the biggest invention in semiconductors since silicon.”

It has wide potential application – both military and civilian – because it can carry higher voltage than other semiconductor materials, notes Breaking Defense. That higher voltage means higher efficiency, which means a system would use less power and produce less heat.

In short, something that I bet many of us have never even heard before is changing the world. 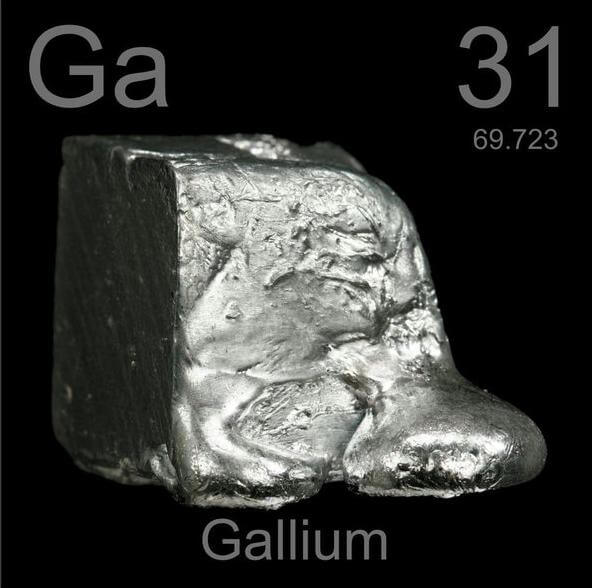 For starters, gallium is a soft, silvery metal that’s already used in electronic circuits, semiconductors and light-emitting diodes (LEDs). It is also useful in high-temperature thermometers, and barometers for example.

But it’s not easily found in nature.

In fact, gallium is never found as a free element and cannot be found in a substantial amount in any minerals. Instead it’s typically found in trace amounts in compounds such as zinc ores and bauxite. And as we noted above, it’s quite unique.

According to Live Science:

“Although it is a solid at room temperature (about 77 F/ 22 C), it is still so soft that you could cut it with a knife. In addition, it has a low melting point of 85.57 F (29.76 C) — less than 10 degrees above room temperature — so if you were to pick up a lump of gallium, it would literally melt from the warmth of your hand. Then if you set it back down, it would solidify again.”

Experts believe the soft metal could easily replace silicon, too.

Yuji Zhao, an expert in electrical and computer engineering at Arizona State University, who is now working on developing a gallium nitride processor that could revolutionize future space exploration missions, noted:

“Due to the intrinsic properties of silicon, integrated circuits (IC) based on this material malfunction at high temperature (about 300 degrees Celsius) and operate at low frequency. GaN material is thermally robust and chemically stable, good at handling high temperature and radiation environments.”

Researchers at MIT believe it could change everything as well.

According to MIT spinout Cambridge Electronics Inc., gallium transistors, for example, have one-tenth the resistance of silicon-based transistors. This allows for higher energy-efficiency and faster switching frequencies – with components that allow the device to be made continuously smaller. Overall, this development could make electric cars cheaper and more powerful, data centers less energy-intensive, and laptop power adapters so small that they could fit inside the computer itself, reports The Electrochemical Society.

“This is a once-in-a-lifetime opportunity to change electronics and to really make an impact on how energy is used in the world,” they noted.

Consider the possibilities if gallium replaced silicon for just a moment.

You can thank silicon for the computer you’re using for example. It’s a critical component in electronics and computer chips, smartphones, even the Internet you’re looking at now.

Corporate America has created billions, if not trillions of dollars worth of products with it.

Every one from Apple, Google, Intel, Raytheon, and the U.S. Department of Defense has used it.
And along the way, the metal has even minted early investors overnight millionaires.

If gallium can now replace it, imagine what would happen to companies involved with it.

According to Popular Science:

“Many computer scientists and engineers, however, believe we will soon reach a point where the traditional chip circuitry made of silicon will be too microscopic to work reliably.”

IBM for example already announced it was allocating $3 billion to newer chips. Reportedly, there is a new focus not only on miniaturizing circuitry to 7 nanometers, but also replacing silicon chips with alternative technologies.

Executives at Raytheon have put considerable effort into gallium research as well.

As reported by ArsTechnica:

In fact, Raytheon and some commercial manufacturers of gallium chips have found a way to produce them more cheaply than other semiconductors—including silicon chips made for the same applications. The ability to handle high power and have fast switching speeds makes gallium interesting, even essential, for a whole host of applications from cellular communications to renewable and portable energy. And as the cost of making gallium chips falls, it could start to challenge silicon for more tasks. Particularly because of its ability to operate at much higher frequencies, it might even become the next thing.”

Even more interesting, not long ago, the U.S. government authorized American defense contractor Raytheon to export a radar upgrade of its Patriot missile defense system which contains a little-known material called gallium, which according to Raytheon’s Vice President of Research and Development, John C. Zolper is a, “wide band gap semiconductor material with special properties that are ideal for applications in optoelectronics, and high-power, high-frequency amplifiers.”

Live Science has even reported:

“Gallium has been studied for three decades as a replacement for silicon, since its higher "electron mobility" should produce faster transistors and therefore faster computes, explained Christopher Hinkle, a materials scientist at the University of Texas.”

Bottom line – gallium has the power to replace and become more powerful and useful than silicon. Imagine how that would impact a stock that’s deeply involved with gallium.

We have to be honest. When we think of the shape-shifting properties we immediately think of the killer T-1000 robot in the Terminator movies.

But that’ll only happen if it fell into the wrong hands.

Outside of Hollywood, a team of researchers from Oregon State University’s College of Engineering is now using 3D printable liquid metal toward the manufacturing of stretchable electronic devices for computer screens and robotics with conductive gallium alloy.

“The runny alloy was impossible to layer into tall structures,” they noted. “With the paste-like texture, it can be layered while maintaining its capacity to flow, and to stretch inside of rubber tubes.”

Mechanical engineers at Carnegie Mellon University are developing a fluidic transistor out of a metal alloy of indium and gallium that is liquid at room temperature. From biocompatible disease monitors to shape-shifting robots, the potential applications for such squishy computers are intriguing, reports Advanced Science.

Scientists at the University of Sussex even found a way to apply electrical charges to the metal, coaxing it into 3D shapes like letters and even a heart.

Even more interesting, IBM has also been developing its own form of electric sustenance called, REPCOOL, or Redox flow electrochemistry for power delivery and cooling. Reportedly, it’s a project modeled after the structure and power supply of the brain, where our blood capillary system both cools and supplies energy to this vital organ. With electronic blood, the researchers believe the same effect can be applied to overheated computers.

"Compared to today’s top computers, however, the human brain is roughly 10,000 times denser and 10,000 times more energy-efficient. The research team believes that their approach could reduce the size of a computer with a performance of 1 petaflop/s from the dimensions of a school classroom to that of an average PC, or in other words to a volume of about 10 liters," as quoted by Interesting Engineering.

Its use in solar energy is just as exciting.

Also, silicon is not a great absorber of sunlight in thin layers, like gallium is.

According to Science Daily:

The material’s flexibility for various applications is due to its broad range of possible conductivities — from highly conductive to very insulating — and high-breakdown-voltage capabilities due to its electric field strength. Consequently, gallium oxide can be scaled to an extreme degree. Large-area gallium oxide wafers can also be grown from the melt, lowering manufacturing costs.

As game graphics become even more power hungry, computers will require five to 10 times as much power than a normal computer. In fact, over the next two years, they’ll require much more electrical power. For that reason, companies are beginning to shift to using gallium.

No Wonder it’s in Such High Demand

If it can replace silicon, it’ll have a problem keeping up with technological demand, just as silicon has in the past. Google, Intel, Apple, Broadcom, BMW, Ford, Raytheon, Boeing… and many more companies and governments will race for plentiful supply.

Even better, gallium is cheaper to produce than silicon.

Again, it’s no real wonder that scientists, governments, and green investors alike are rushing to find supply, as it quickly transforms our way of technological life.

The question now is – how do we profit from it?

AXT Inc. (NASDAQ:AXTI) is a very attractive business currently trading at a inexpensive valuation. We strongly believe it’s poised for increasing sales and earnings in the coming years, as its products tied to mobile smart phones, LED and solar technology increase.

Most interesting, the company’s patented vertical gradient freeze (VGF) technique for manufacturing semiconductor substrates provides significant benefits over other methods and has allowed AXTI to become a leader in the space.

VGF has become a proven technique for growing semiconductors composed of multiple elements, such as gallium, arsenic, iridium, and phosphorous.

According to the company, the process involves growing uniform crystals to a certain diameter, thinly slicing the crystal to very precise tolerances, edge rounding the form factors, polishing them into smooth wafers, then carefully packaging the wafers in a class 100/1000 room for shipping to customers. The main advantages of the VGF process include its scalability, low stress, high mechanical strength, and a defect rate that is orders of magnitude lower than conventional compound semiconductor crystal growth processes.

At the moment, the company has manufacturing facilities in China and investments in 10 subsidiaries and joint ventures in China that produce raw materials for its supply chain.

That supply chain allows it to meet growing and plentiful demand.

Just imagine what could happen with a small company if it can grab even 1% of the semiconductor market alone with gallium. We’re talking about nearly $5 billion of potential revenue. So you can clearly see why this stock gets our hearts racing.

Given its exposure to gallium, AXTI may not remain a small company for much longer.

For years, THE KEY TO CONSISTENT TRIPLE DIGIT
GAINS has been…

Only a small percentage of investors know it
even exists, but ii vou can spot "The Pattern" on
these charts, you could easily collect 2-3
winners every single month!