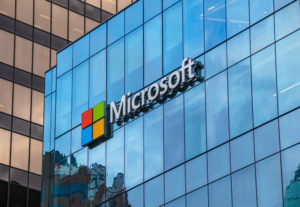 Traders are betting on a rally in tech giant Microsoft (MSFT). The November 6th $230 calls, expiring in just over a month, saw a huge uptick in volume. Over 7,000 contracts traded, a 30-fold rise in volume from the prior open interest.

With shares around $212, the $230 calls represent just under a 10 percent rally in shares from here in the next month, at least if the option trade is to move in-the-money. The buyer paid $3.33 per contract.

With a 52-week high of $232, it’s possible that shares rally back to that point in the next month or so provided there’s a strong stock market. The company also reports earnings in late October, so the buyer is likely trying to get a bargain now.

Action to take: It’s hard to bet against Microsoft, which has been a huge beneficiary of tech trends this year. While it doesn’t attract as much attention as flashier tech companies, it’s still been a strong performer and will likely continue to be for some time. Its mix of software, video gaming systems, and even a social media network allow the company to be a top performer (or close second) in a number of spaces.

Traders will probably be able to score high-double digit gains with this November $230 call option, which is far cheaper than having to buy 100 shares outright.