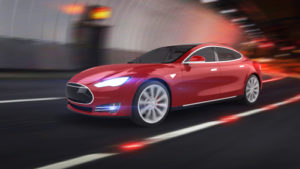 Nearly 9,100 contracts traded on the June 2021 $640 calls on Tesla Motors (TSLA) recently. That’s a 12-fold rise over the prior open interest of 766 contracts. The trade, expiring in 248 days, would require shares to rally about 45 percent from their current price.

The option buyer paid about $51.90, or $5,190 per contract to make the far out-of-the-money trade. Shares of the company have been one of the top performers in the past year.

While a 45 percent move in shares of most companies seems implausible, it would be on the lower end of the return scale for Tesla. The electric vehicle company has shown four quarters of profitability, a key requirement for joining the S&P 500 index, and sales have been on the rise as well.

Action to take: While the trade is pricey, a continued move higher in Tesla shares could make this a high-double or low-triple digit winning trade. At nearly $5,200 per contract, a double could do well for a trader.

As with any call option trade, a surge higher in shares could lead to a chance to take profits before the time premium bleeds out as well. Given Tesla’s prior returns and growth prospects, however, this looks like one pricey, but not expensive, options trade to follow.