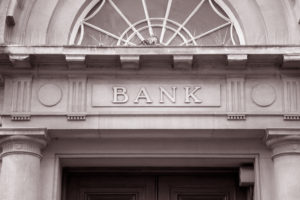 The puts, which are about $7 in-the-money, expire in 826 days. The long-dated trade, known as a LEAP, is a bet that the bank’s shares will head lower. The trader paid just over $10.00, so shares will need to trade under $20 at expiration for the trade to profit.

Shares of the megabank are down this week following a lackluster earnings report. The company is still dealing with the fallout from the faked account scandal of a few years ago. And banking profits are down across the board as lower interest rates take their toll on banks.

Action to take: The long-dated trade is an interesting one. To really generate a massive profit, the company would have to see shares dive considerably, perhaps even go through a banking crisis. Meanwhile, the seller of the put options may be expecting shares to rally.

In the next few weeks and months, it’s likely that shares will trend higher, given that they’re near oversold levels. The April 2021 $27.50 calls, trading for about $1.05, offer an inexpensive way to play a likely bounce in shares before the end of the year.

Traders should look for mid-double-digit gains before cashing out. While the bank shares could rally and provide triple-digit gains, that kind of quick move higher seems unlikely in a low-interest rate environment and with a mega-bank stock.