An Inexpensive Way to Hedge Your Portfolio From a Market Crash 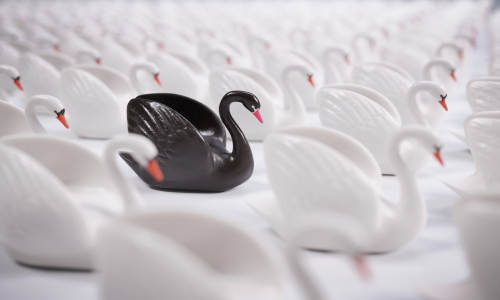 Many investors have been waiting for the other shoe to drop in markets since the financial crisis. Some have stayed entirely on the sidelines. They’ve missed out on the greatest stock market rally of all time, fueled by historically low interest rates.

Others have kept a lot of cash on the sideline and underperformed.

But those who have stayed invested have done well. With the right strategy, they can also hedge cheaply.

This “inexpensive market insurance” strategy allows investors today to keep nearly all of their money invested in the markets, but also provides them with a powerful tool to protect their wealth in a decline.

This tool is based on a strategy used by Nassim Taleb, author of The Black Swan.

In that book, he describes his pessimistic strategy of short-term U.S. government bonds, cash, and low-cost, far out-of-the-money put options. That last piece is what allows him to bank tremendous profits on a market decline.

Market declines don’t happen often. When they do, traders who have a big profit from a short position are also more likely to stay the course with their long positions. That’s why having a hedge strategy is a powerful tool to have!

One of Taleb’s disciples, Mark Spitznagel of Universa Investments, is less pessimistic. He sees this put-buying strategy as a way to have your proverbial market cake—being invested in the market—while still making money even when markets go down.

In a recent interview, he describes this strategy as “explosive downside protection.” When markets are up, as they usually are in time, he loses a little amount on this downside protection. That’s akin to paying car insurance each month. Nobody wants to be in an accident, but they do happen. That’s when the payoff occurs.

And thanks to having a portfolio taking advantage of long-side opportunities in the market, the profits he makes on the long side more than pays for the cost of this crucial market crash insurance.

Putting the Strategy at Work

Many investors fear options trades. They’re fast moving, and a lot of money can be lost quickly. While that overlooks the money that can be made, using a put-buying strategy like this will tend to lose money gradually over time.

However, during a market correction of 10 percent or more, the strategy will start to pay off. The put options will rise in value, offsetting portfolio declines elsewhere. Thus, put options are a powerful tool that allow individual investors to hedge their portfolios… or specific positions in individual stocks or sectors. It’s one we’ve suggested before.

For most investors starting out, the simple strategy would be to start buying put options against SPY, the SPDR ETF for the S&P 500 Index that’s widely traded. Because it’s widely-traded, there isn’t a huge “spread” on the options that trade either, so it’s easier for traders to build a position without having to overpay.

A trader would want to buy a few of these to the point that it makes up 2-5 percent of a portfolio. That’s it. Spitznagel uses about 3 percent.

Say the market starts to decline in value in the next few weeks, with a standard 10 percent drop. These options should start to rise to reflect the decline in SPY. If the drop goes into full bear territory of 20 percent or more, the options could end up doubling before all is said and done.

After all, when markets have a correction, they tend to unfold quickly. Traders call this “taking the escalator up and the elevator down.”

More likely, however, markets won’t correct that far. Not to worry. If that’s the case, profits and dividends from long positions will cover the cost of this trade and you’ll have a loss to report at tax time.

More advanced options traders could even build a “ladder” of put options expiring at later and later dates. As one option expires, a new one could be bought farther out. That way, there’s no one big trade that expires every few months. Instead, options end up expiring a lot like monthly insurance premiums.

Consider adding this Black Swan strategy to your portfolio today—especially if you’re concerned about today’s high valuations. Just remember, you don’t need to overdo it. Markets tend to rise over time, but avoiding losses during the inevitable downturn can greatly improve your investment returns.