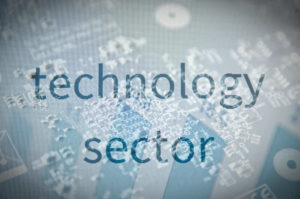 As the S&P 500 finished higher on Friday to end the week, it was the Technology sector that seemed to lose its way. While the sector finished in the middle of the pack for the week in terms of performance, it was the laggard on Friday with nearly a 1.5% decline. The only other sector to finish lower was Communications. The Technology Select Sector SPDR Fund (NYSEARCA: XLK)  is an ETF that tracks the sector and it saw some large bearish activity emerge as the price began to fall.

Last week saw the Industrial Sector lead the all S&P 500 sectors with a 4.74% gain. That was followed by Financials with a 3.37% gain and Energy with a 3.19% gain. Technology would have likely topped the sector list of weekly winners if it were able to post a positive return on Friday. Instead, the ETF opened slightly lower and continued lower throughout most of the day. Of course, it was Apple Inc (NASDAQ: AAPL) and Microsoft Corp (NASDAQ: MSFT) that led the sector lower as the finished 2.45% and 1.79% lower, respectively.

While the overall activity was below average for the day, the put option activity was about 20% higher than average. The puts had 45% of the volume get filled at the ask and 35% at the bid on 25,533 contracts. Nearly one-fifth of the volume occurred in multiple fills but one trade. The trade was a 21 AUG 20 110/103 long put vertical for around $0.90. The expectation is that XLK will be below $103 in 14 days.

Here are links to our latest unusual option activity reports.

Action to Take: Option provide a way to be able to limit risk while maintaining significant potential reward. Shorting XLK is a difficult proposition because of its unlimited risk. Speculators of those looking to add positions that will hedge downside risk may want to consider a similar trade but with more time to expiration. The 18 SEP 20 110/103 long put vertical can be bought for around $1.50 or less. The trade has $150 of risk per contract with a max gain of $550,